Yes on L - North River Farms will contribute $80 million in new infrastructure and improvements at no cost to taxpayers. These improvements will benefit everyone in Oceanside and will help roadways used by the region’s public bus system function more efficiently – including improved traffic signal timing for every intersection along SR-76. 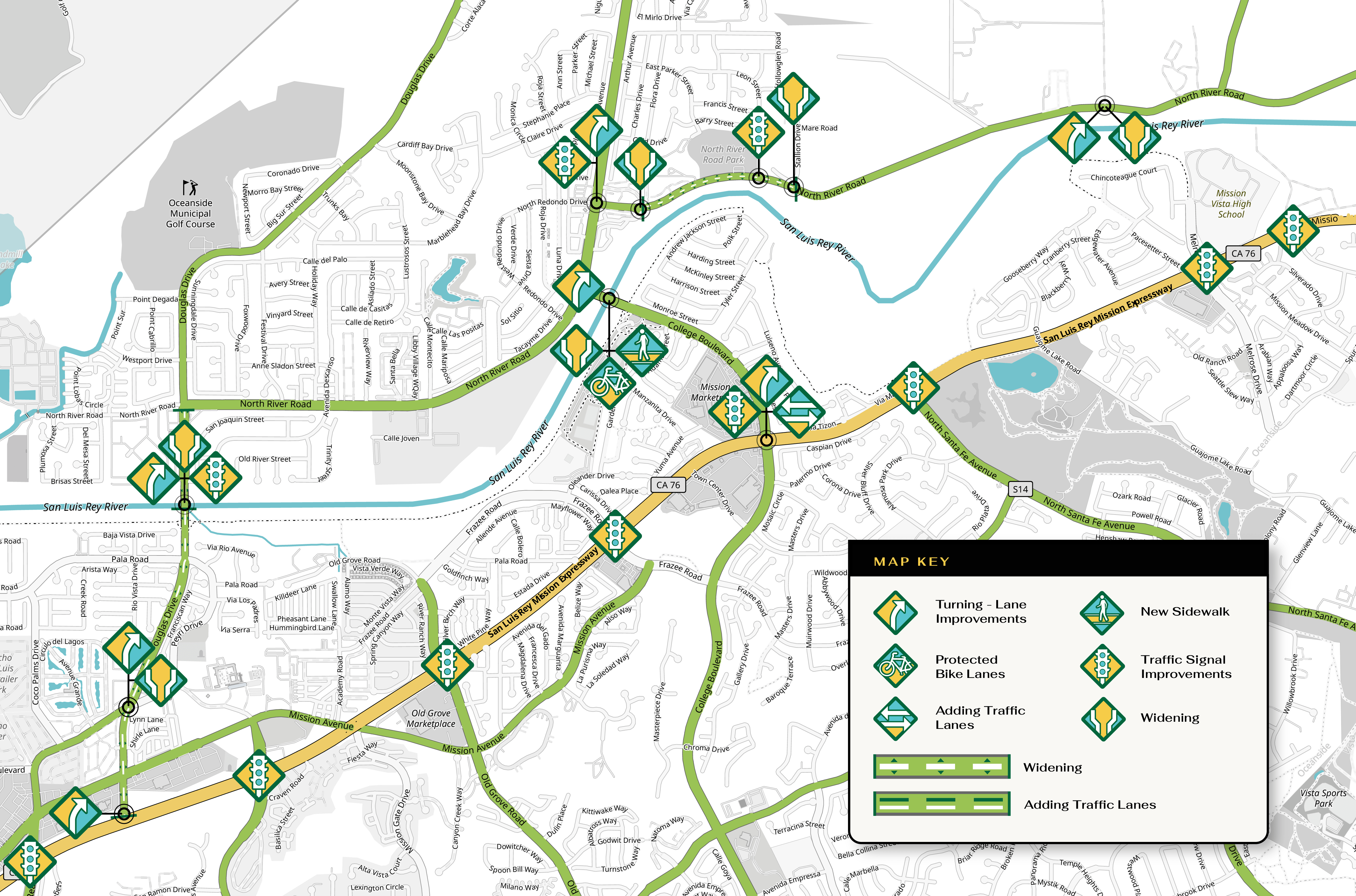 Currently carries 4 lanes of traffic, 2 bike lanes, and one sidewalk on the north side.

Forecasted by the City’s Master Transportation Roadway Plan to operate at Level of Service E or F in the future. Additional lanes are needed but there is no funding mechanism for all the improvements identified by the City. Implementation of all the necessary planned improvements for this intersection by any one private development project would be “economically infeasible.”

NRF will modify the existing College Boulevard Bridge to accommodate six (6), 11-foot lanes of traffic on the existing concrete deck. The barrier and sidewalk on the north side of the bridge shall be removed, with the barrier replaced with a new type.

The existing center barrier will be removed and replaced with a raised center median. NRF will install two new 8-foot bicycle and pedestrian cantilevered pathways affixed to the north and south side of the College Boulevard Bridge. College Boulevard will be widened with the curb-to-curb length expanding to 86 feet, to match the curb-to-curb width of the bridge. NRF will provide a new sidewalk along the eastern portion of the North River Road intersection.

Other improvements include restriping. The NRF mitigation measures will “increase the capacity” of this segment of College Boulevard. 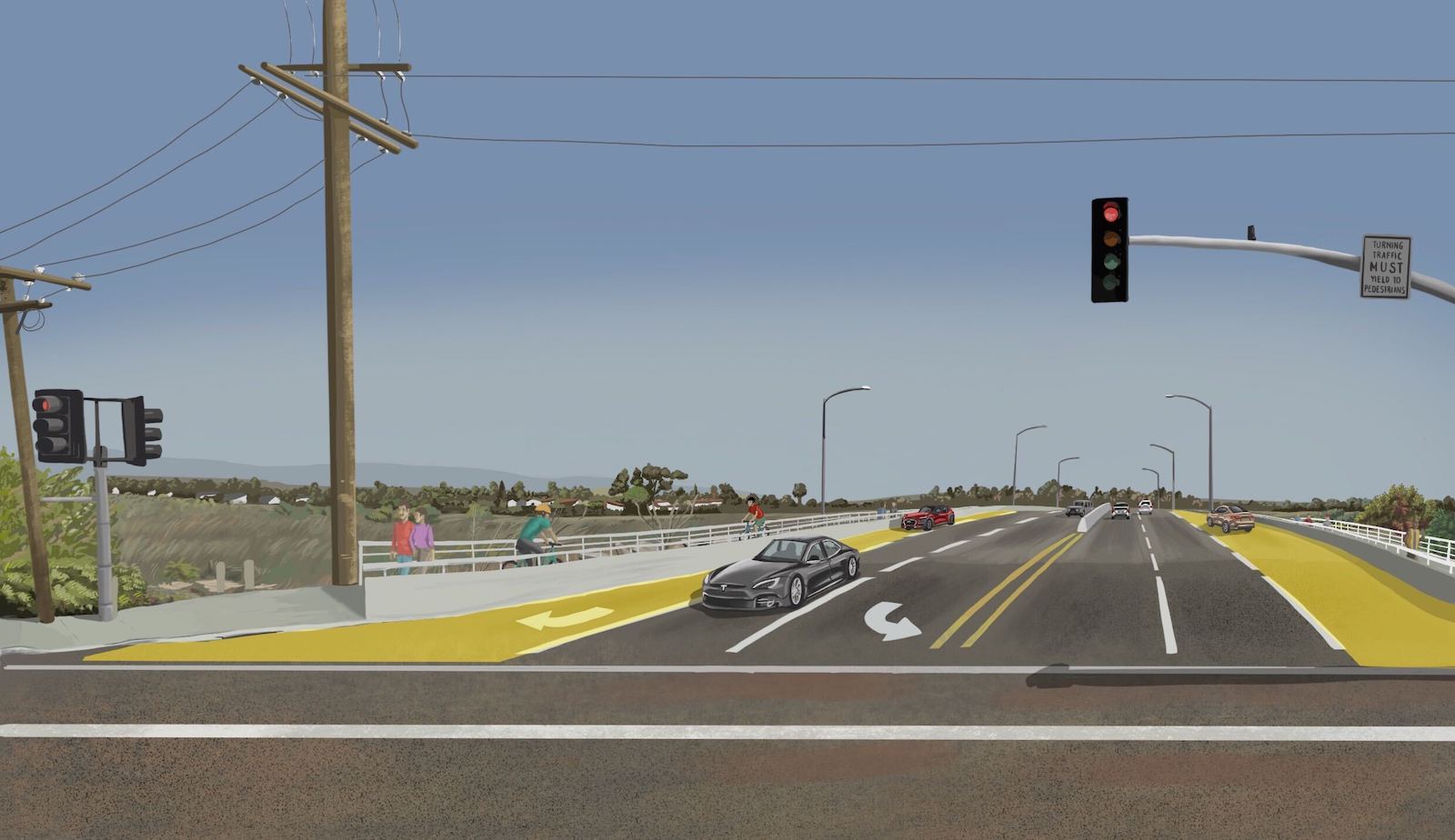 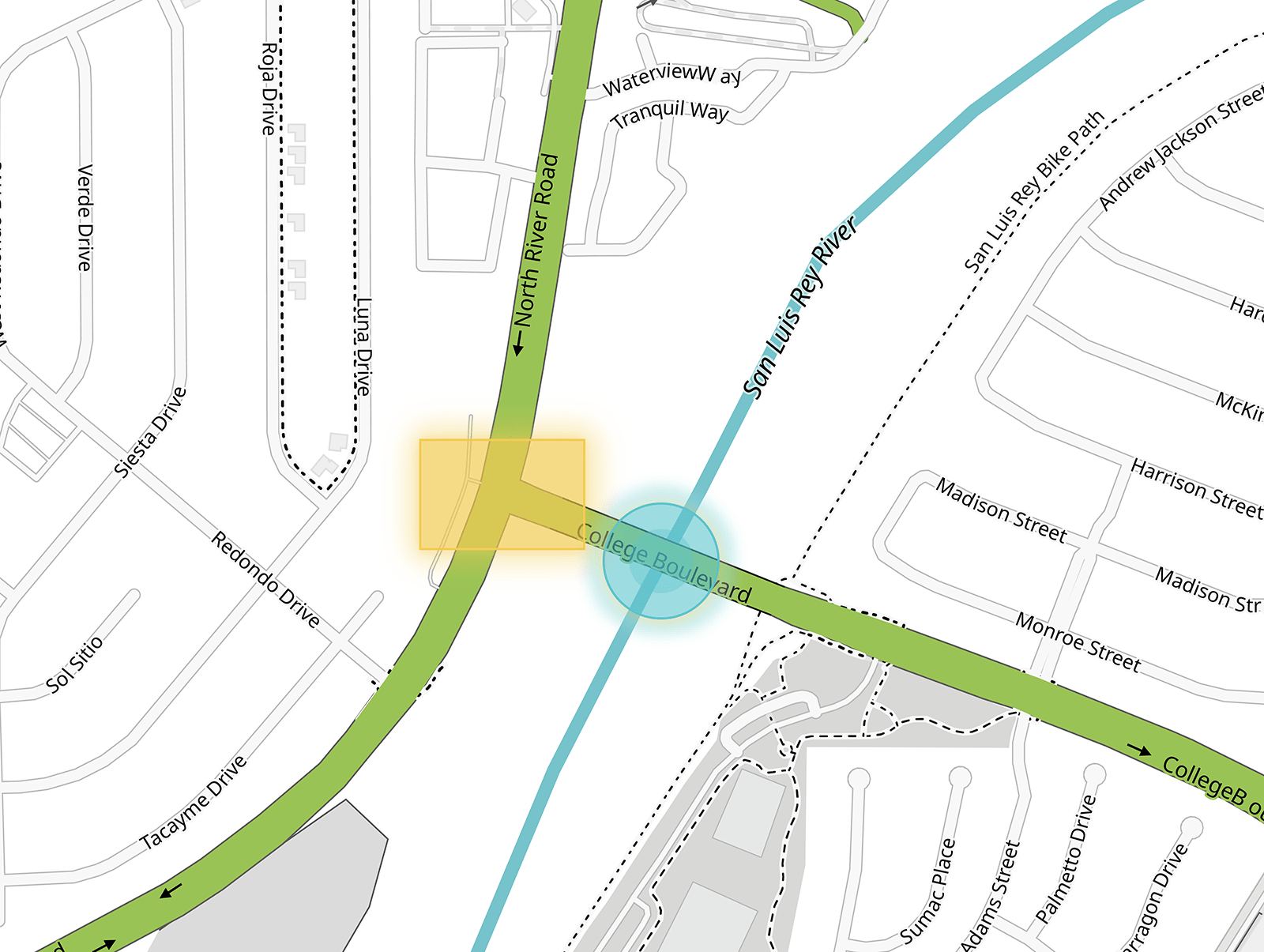 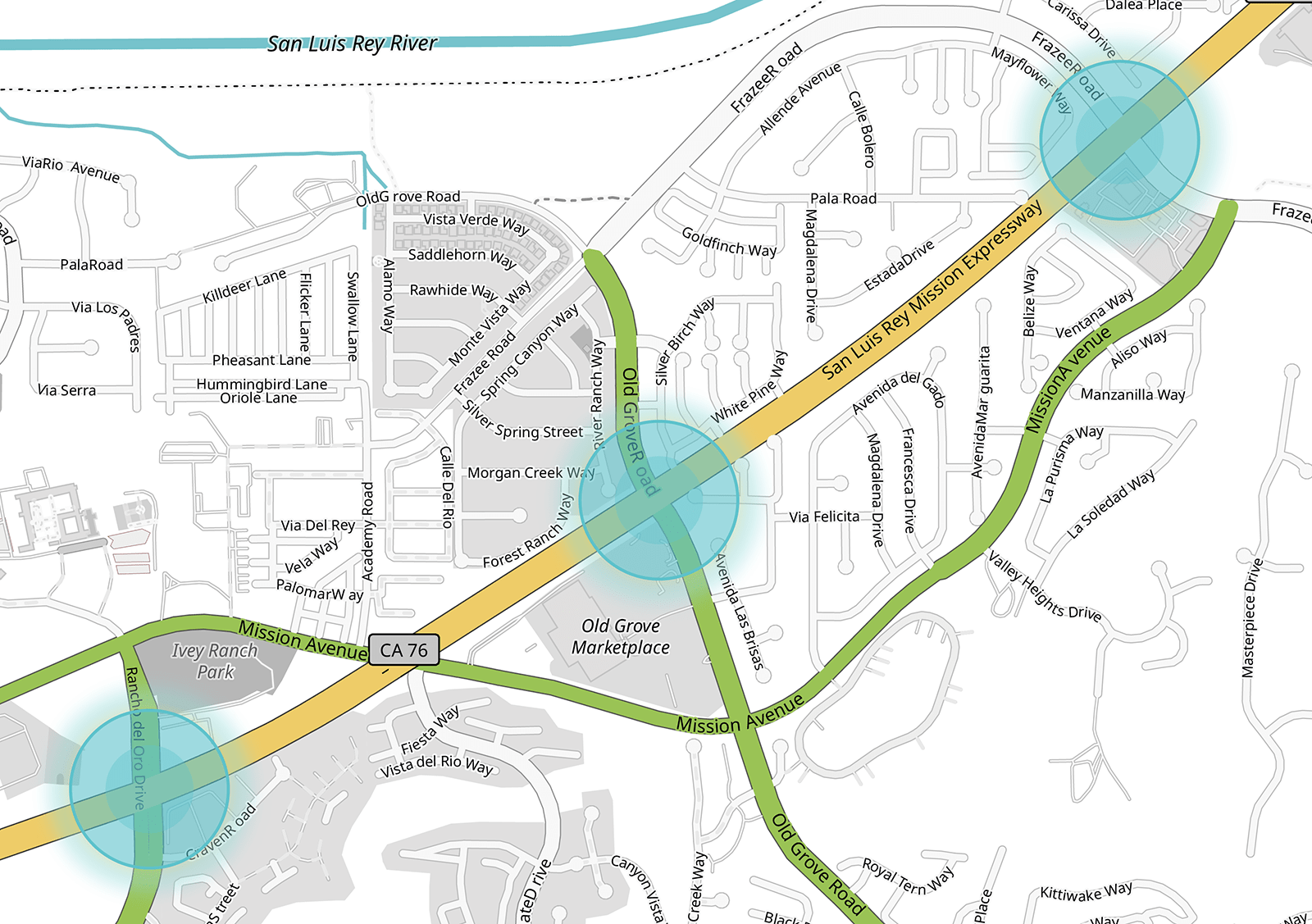 The City’s Master Transportation Roadway Plan proposes to widen SR-76 to 6 lanes through this intersection, but this is not happening because there are several obstacles: right-of-way is not available to complete the widening, there’s no funding mechanism for the improvements identified by the City, and the intersection is within Caltrans jurisdiction and Caltrans has no plans to fund and complete the widening. Since there is no funding mechanism, NRF can’t pay a “fair share” toward a future widening. Thus, NRF’s contribution will be toward Adaptive Traffic Signal Controls at all 8 intersections along the 76.

NRF will pay for Caltrans to install Adaptive Traffic Signal Controls on SR-76 at up to eight intersections within this area. 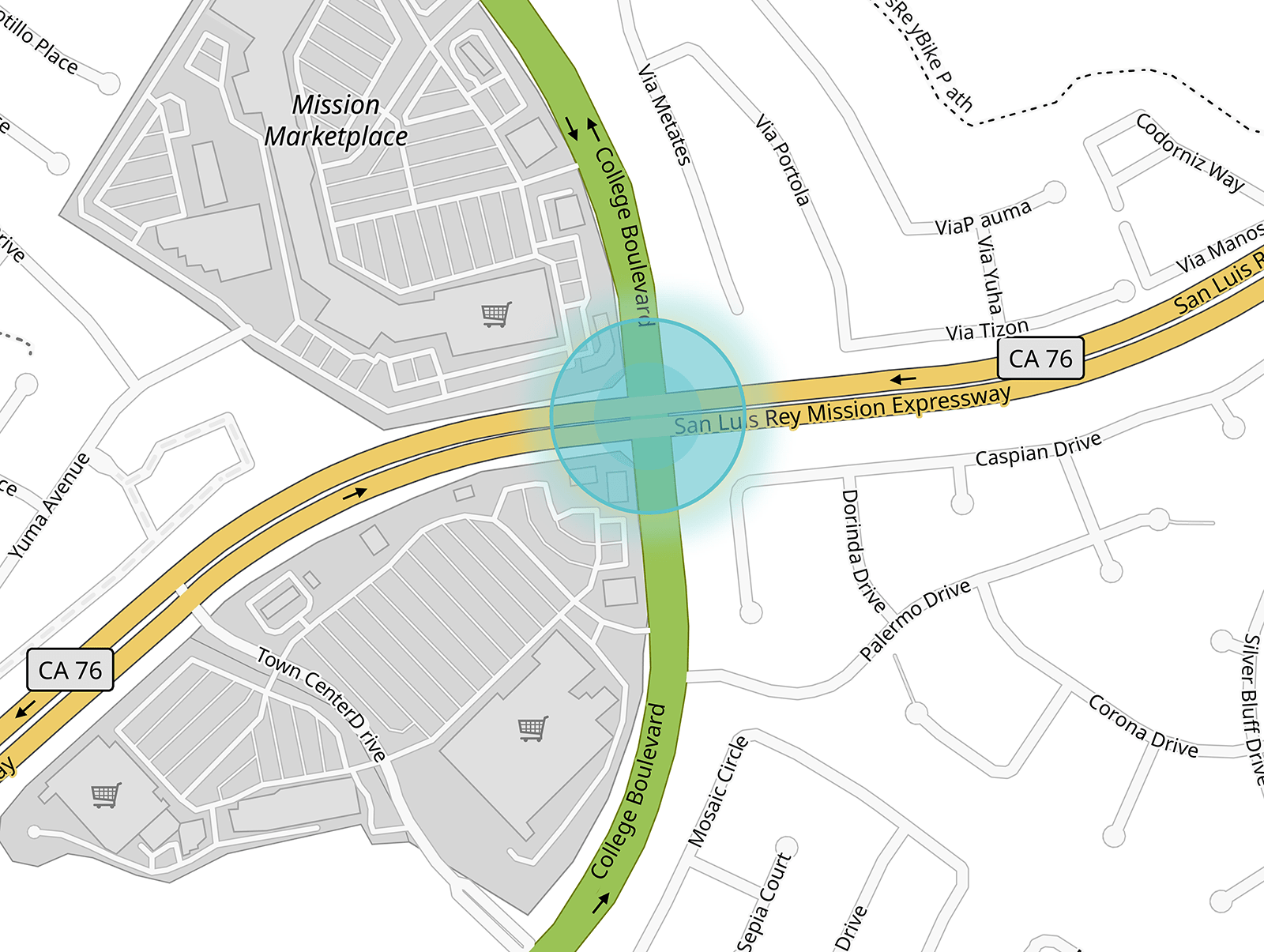 Before: Improvements to this intersection have been designed and a construction cost has been prepared.

After: NRF will pay a fair share toward the planned improvements. 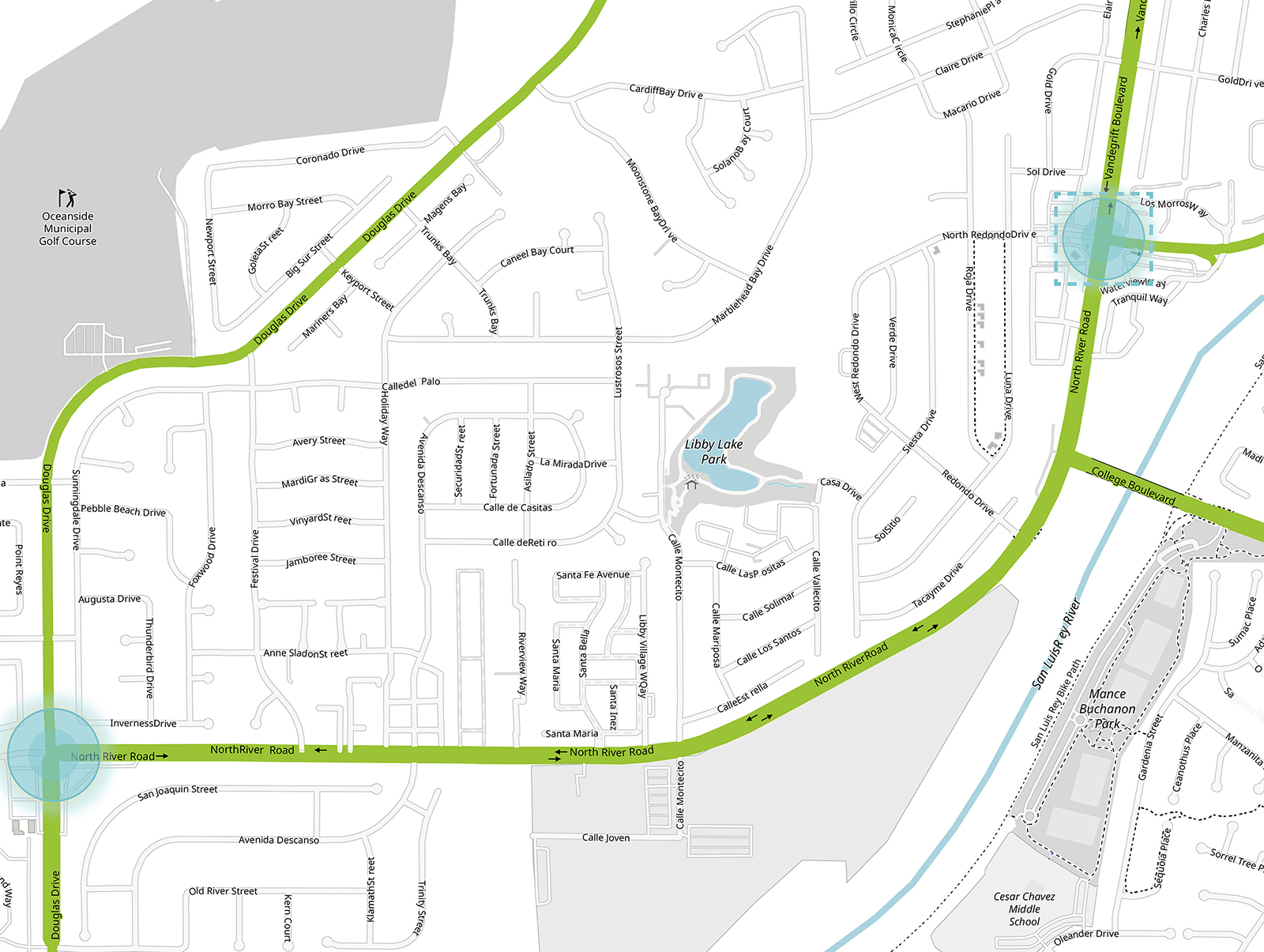 Before: There are dual westbound left-turns, but only a single right-turn.

Also, NRF will conduct a traffic signal optimization study and implement the results along North River Road between Douglas Avenue and Vandegrift Boulevard. 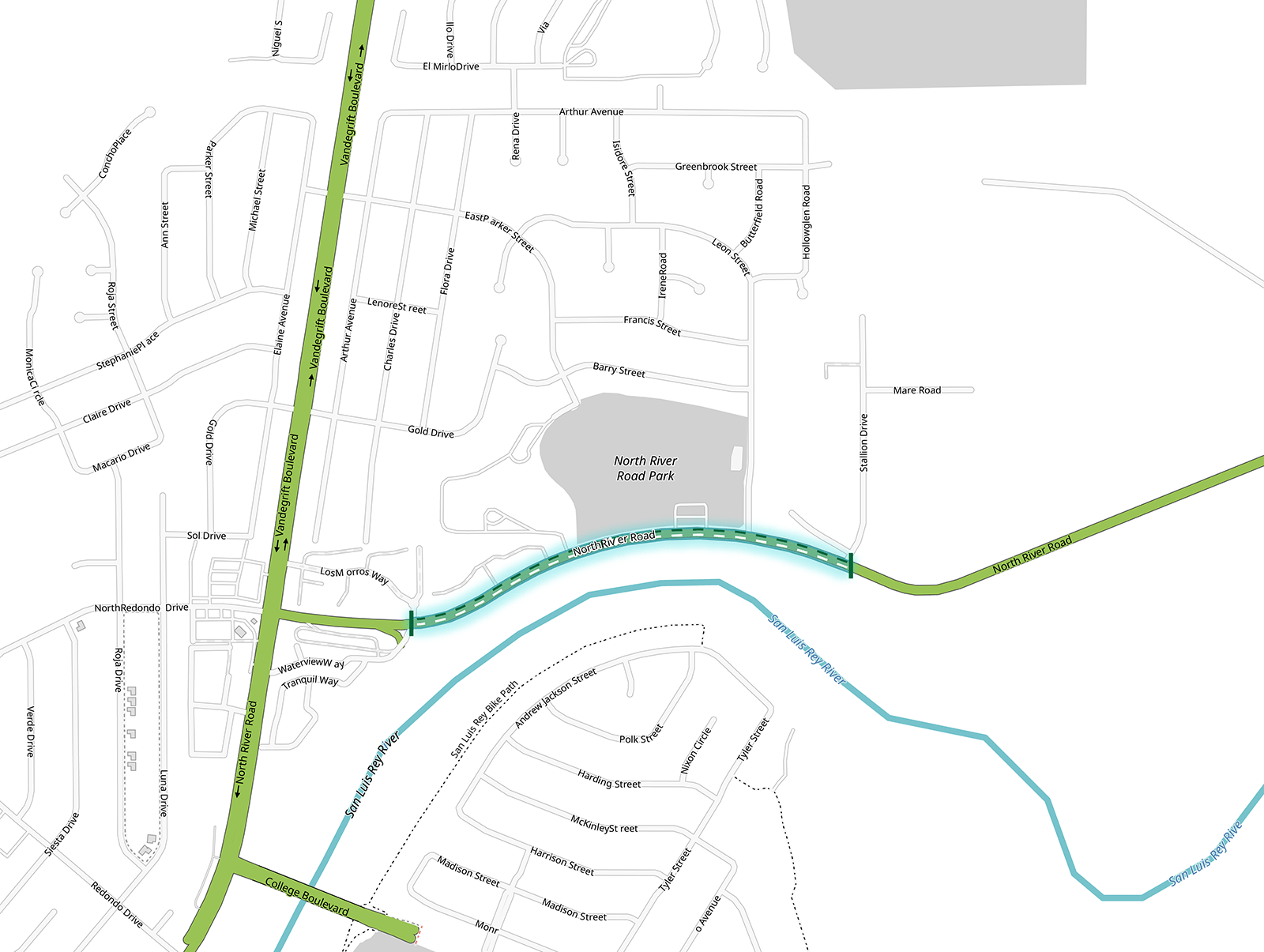 Before: Two lanes. Currently, there are bike lanes and on-street parking.

After: NRF will restripe lanes, through one of two options: 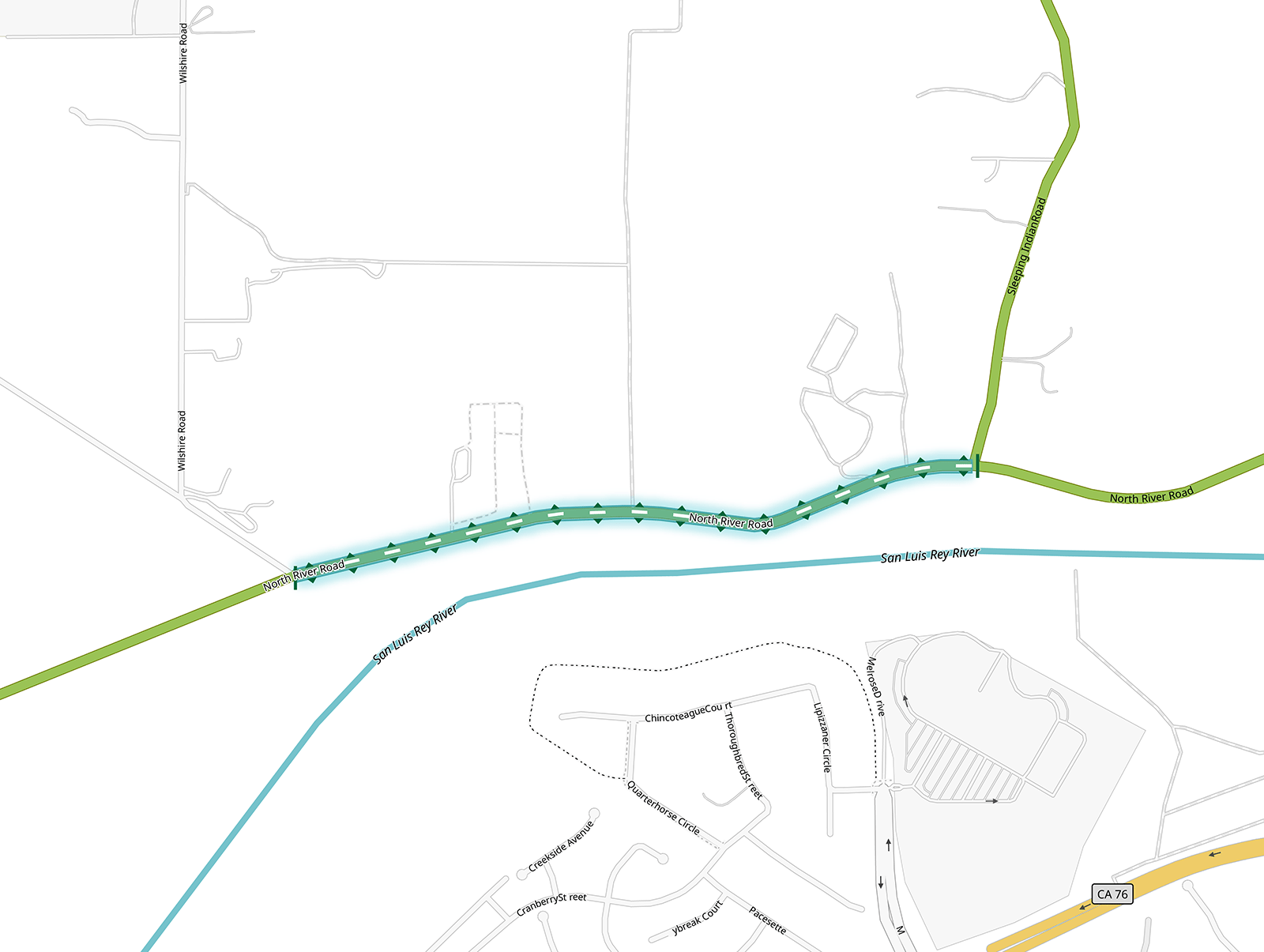 After: NRF will widen the North River Road/Sleeping Indian Road intersection to provide an eastbound dedicated left-turn lane. This will improve the flow of eastbound thru traffic and reduce the potential for vehicle accidents due to the slowing of eastbound traffic. 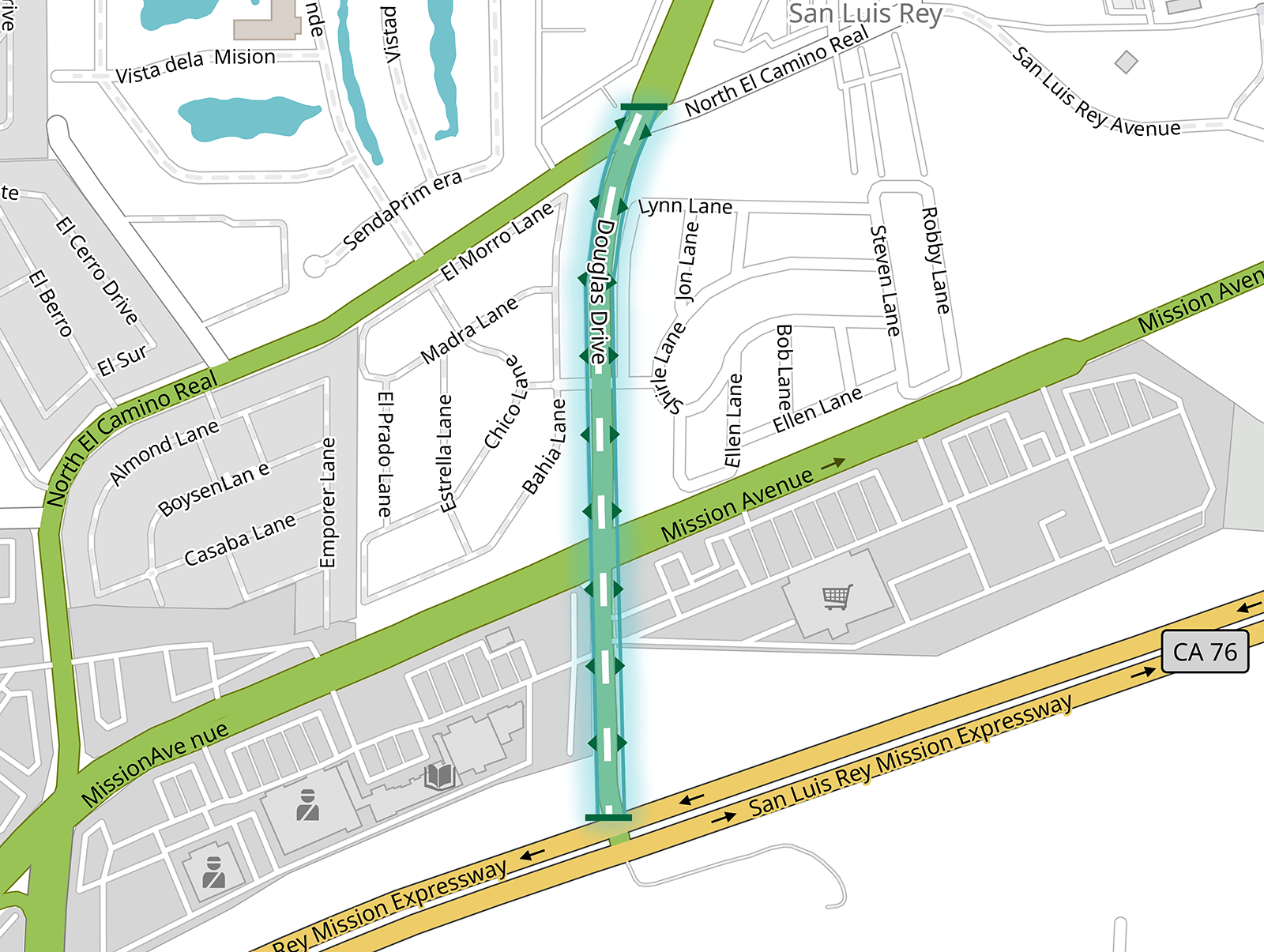 NRF will construct a raised median within the existing two-way left-turn lane. This will add capacity. 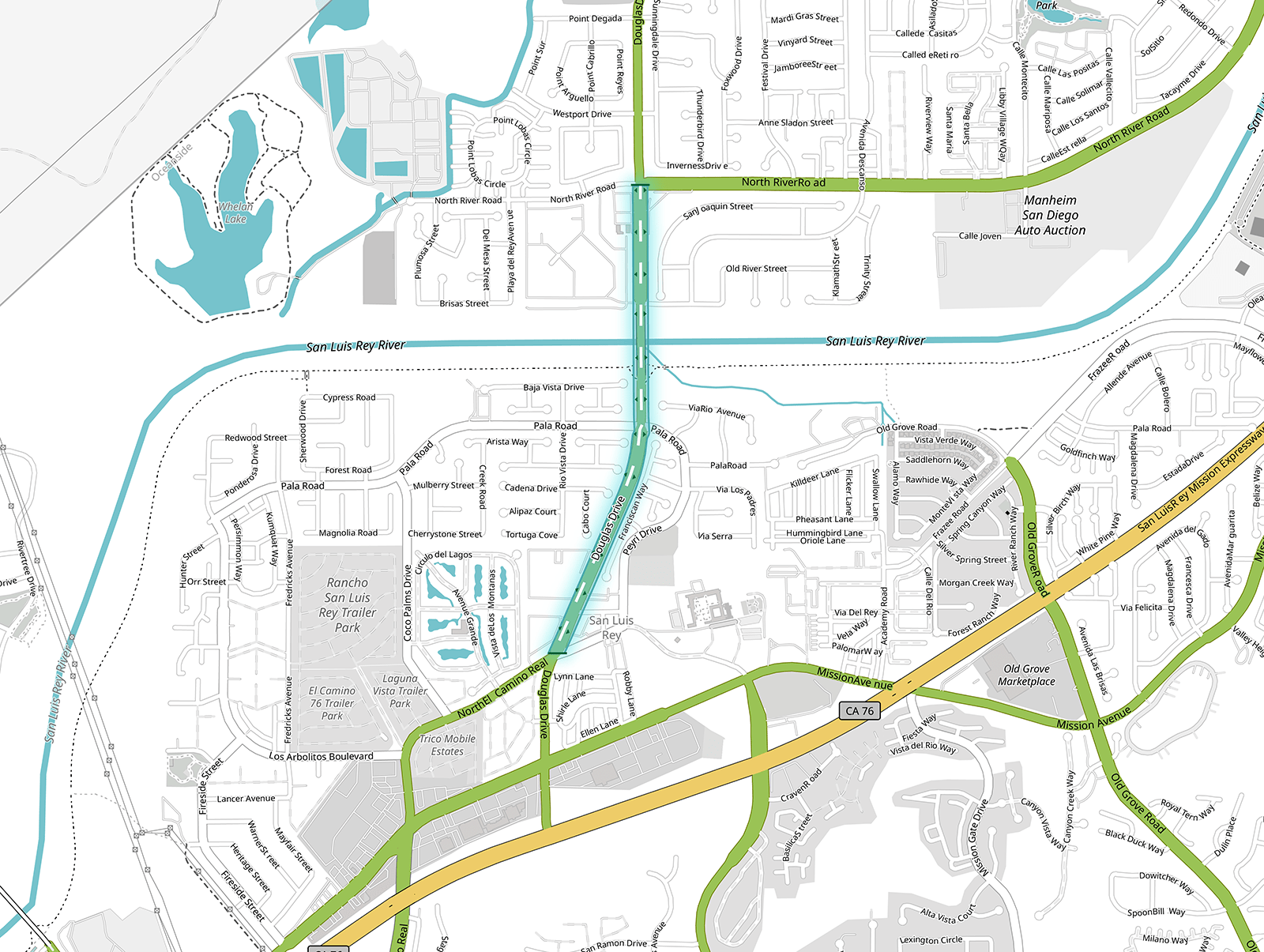 Before: The City’s Master Transportation Roadway Plan proposes widening this to six lanes.

After: NRF will pay a fair share of the cost of widening this segment of road. 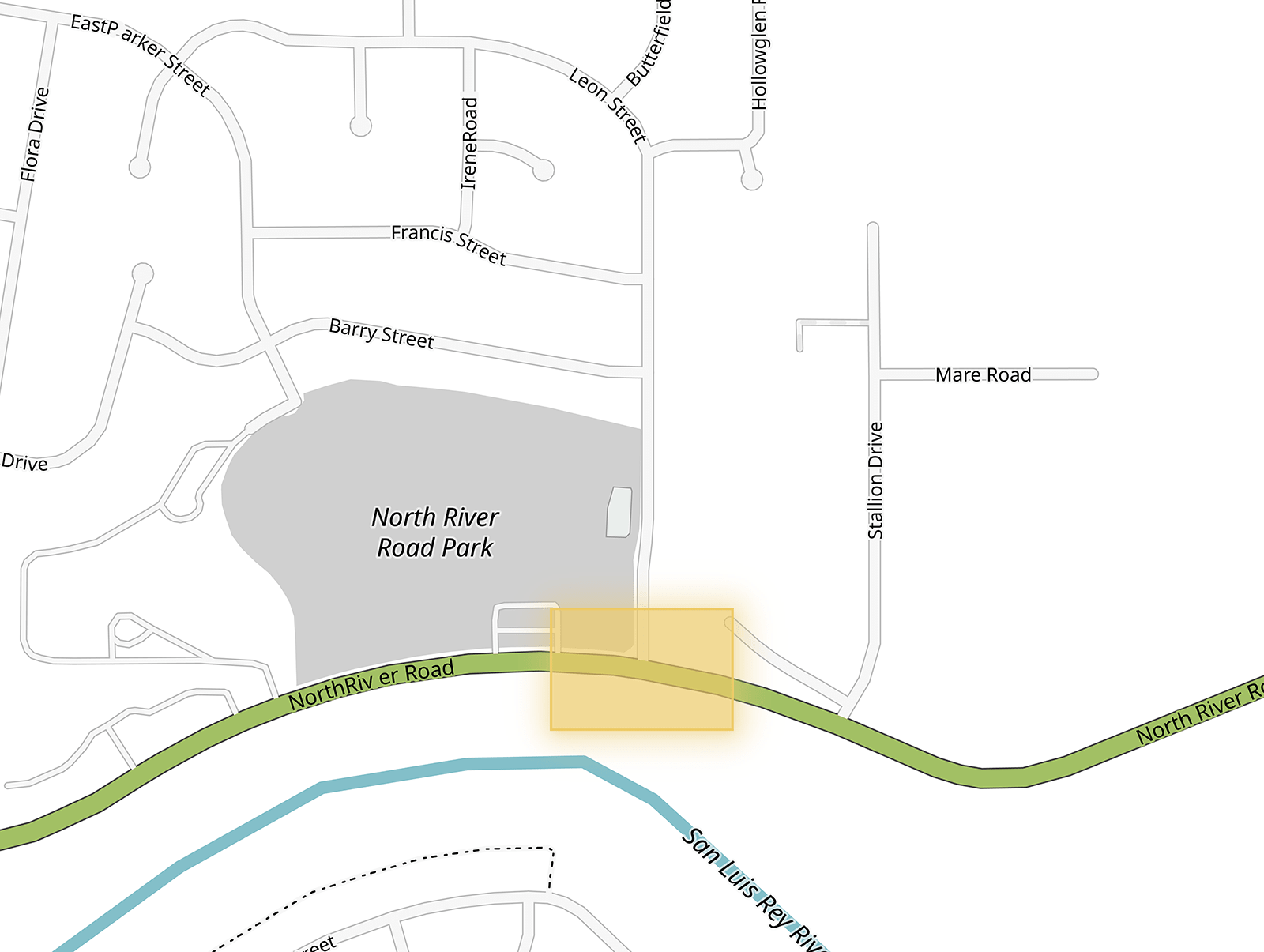 NRF will signalize this intersection.

NRF will provide an eastbound right-turn overlap phase at this intersection.

Please use the following form to contact us with any questions!

Thank you! Your submission has been received!
Oops! Something went wrong while submitting the form.